The search for the perfect shorts

February 10, 2018
I've been very taken with the Itch to Stitch Belize Skort.  I quite fancy the idea of a skirt with a pair of built in short.  Possibly stemming from my days of cycling to school with my bottle green pinafore school uniform and trying to keep the cycle somewhat PG 13. 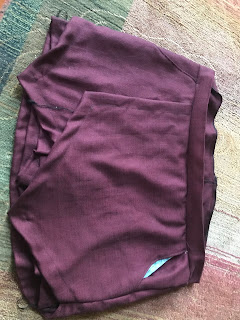 So version 1 was a muslin using wine fabric from stash (purchased way back in the early days of my sewing to upholester a couch but I moved first!  Its not upholestry fabric).  I made a rough version using my largest measurement (waist) which worked out as size 20. 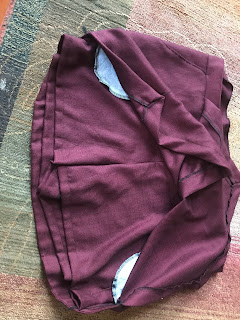 The pattern is beautifully drafted and has some really lovely features - like the mitred corners on the inside of the skirt front. 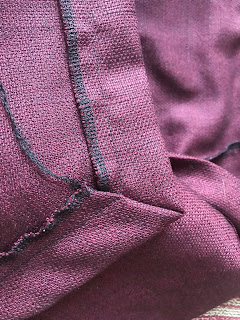 Not very well mitred above ast was my test case and I couldn't really figure how all the pieces went together.  But so impressed with the different pattern pieces and how neatly finished the garment is. 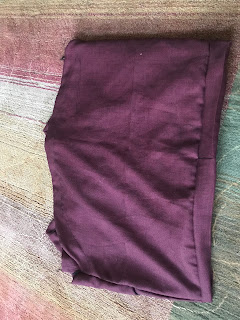 The Belize shorts part of the skort is only really visible at the sides where the skirt curves up.  The back pattern piece is on a curve.  And the front - as ably illustrated by my feline helper is two overlapping pieces. 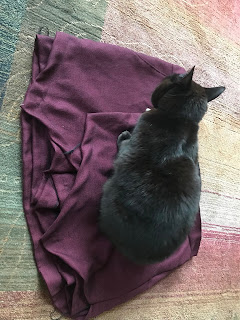 Unfortunately, the test muslin was seriously too big.  I went with my waist measurement and was really out of luck.  So I decided to go with my hip measurement and throw caution to the wind and make a 'proper' version of just the shorts (fail quickly, right?). 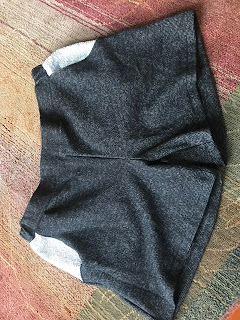 So two sizes smaller and I used contrasting fabric I think I bought at a Wilson Trollope pop up shop. 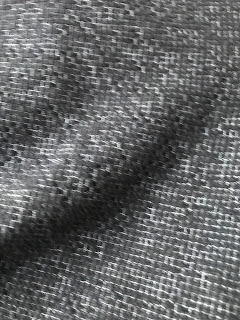 Its black with white check and alternatively white with black check for the contrast. 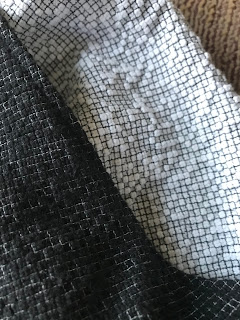 I lined the pockets with a double layer of silk from stash. 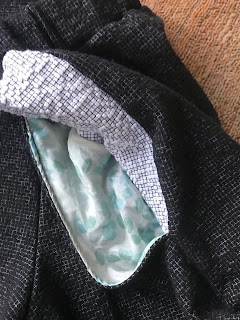 The back has an enclosed elastic waistband. 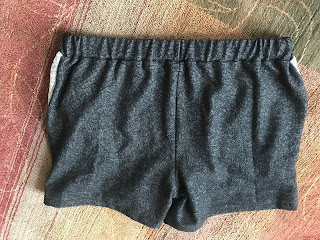 All in all a neat finish and a nice pair of shorts but too big.  Dammit. 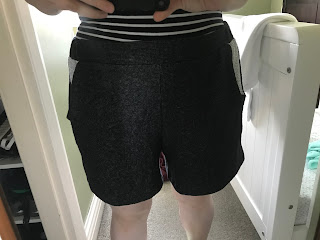 I'm stretching out the waistband here so its not quite this bad but they're in danger of not staying up and the legs feel quite baggy. 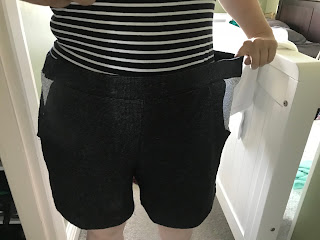 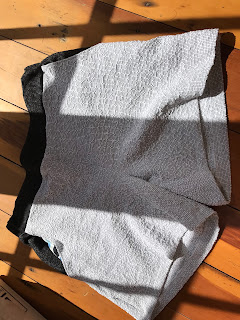 I went down another two sizes.  The fabric this time was the contrast to version 2.  I think I prefer it mostly dark but these work too.  I kept the dark for the waistband as well and think that works a bit better than just the contrasting pockets. 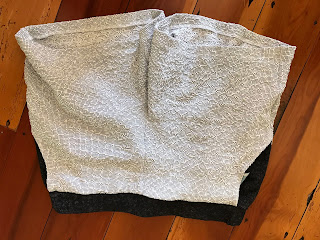 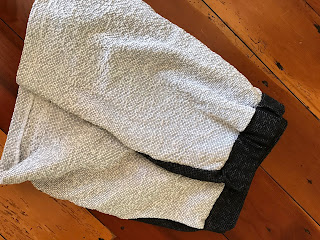 Pockets are lined with cotton voile (also made a Springfield Top with this fabric). 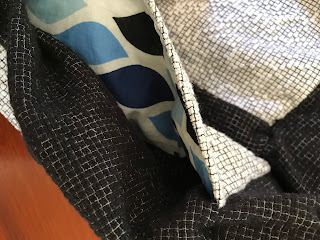 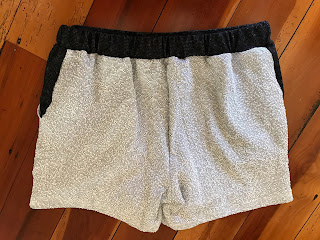 Not a bad fit at the waist but I have a rather flat seat (or more explicitly a non-existant bum) so did some hacking to make the seat a little less full after the shorts were sewn (I just sewed the back crotch a little more together) - there's quite a bit of extra bulk between the thighs but they're wearable (and I have too!). 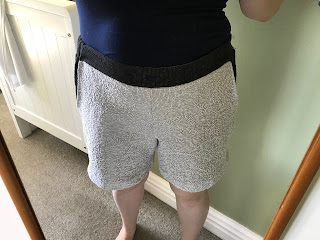 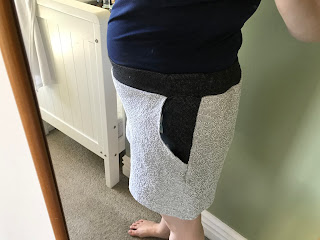 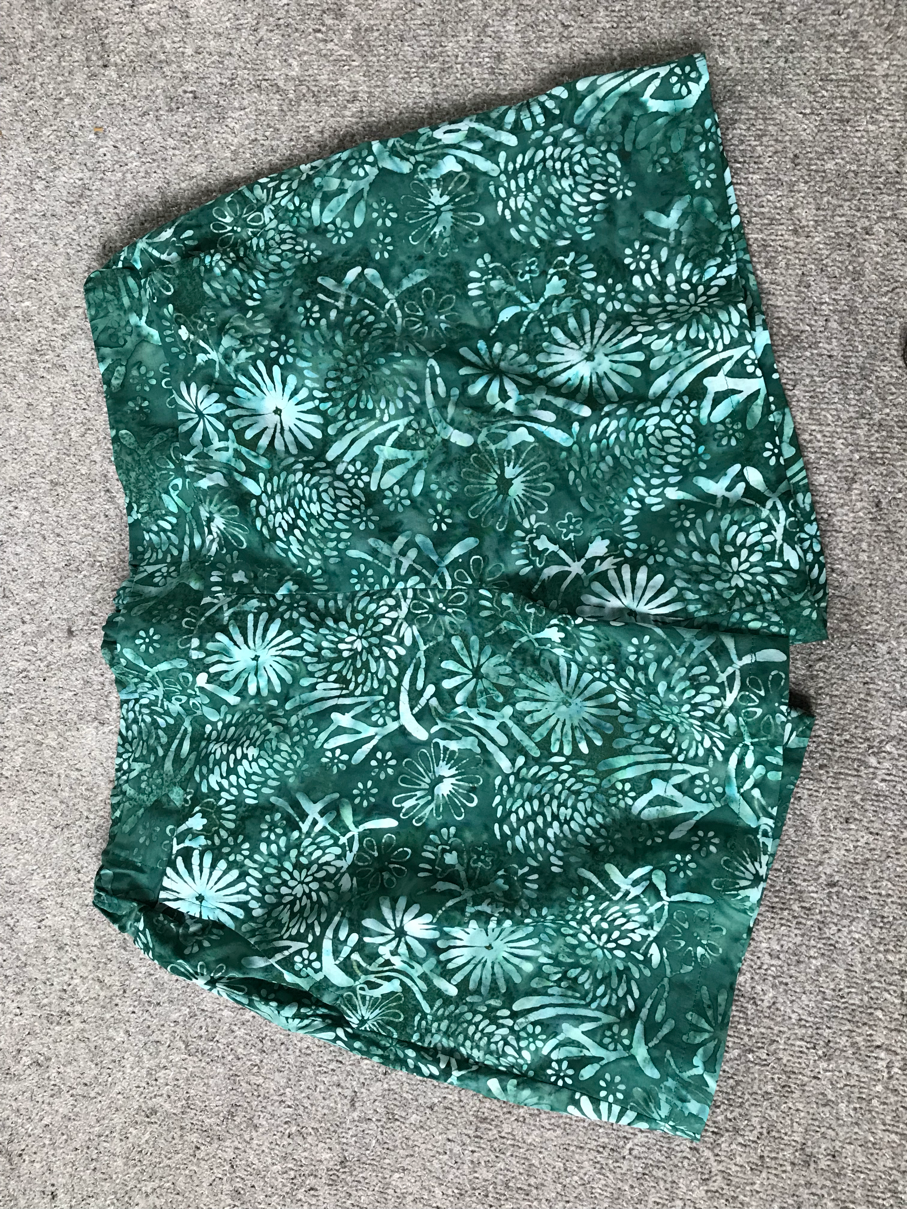 I did a flat seat adjustment on this version.  The really annoying thing about how to do this from tutorials online (and a craftsy class I purchased - Custom Fitting: Waist and Hips) was that the amounts that you needed to do the FSA for weren't custom.  They all suggested a particular amount and then checking.  I really wasn't feeling it after making three previous pairs of the same pattern and only getting one mostly usable one so far.  Annoyingly, if I hadn't 'fixed' the white pair of shorts I would have able to measure the amount I needed to remove.  Ah well, live and learn (or at least try to remember).  The tutorials I used were: the sewing lawyer and Ann Rowley (she's the wonderful woman who won the first Great British Sewing Bee). 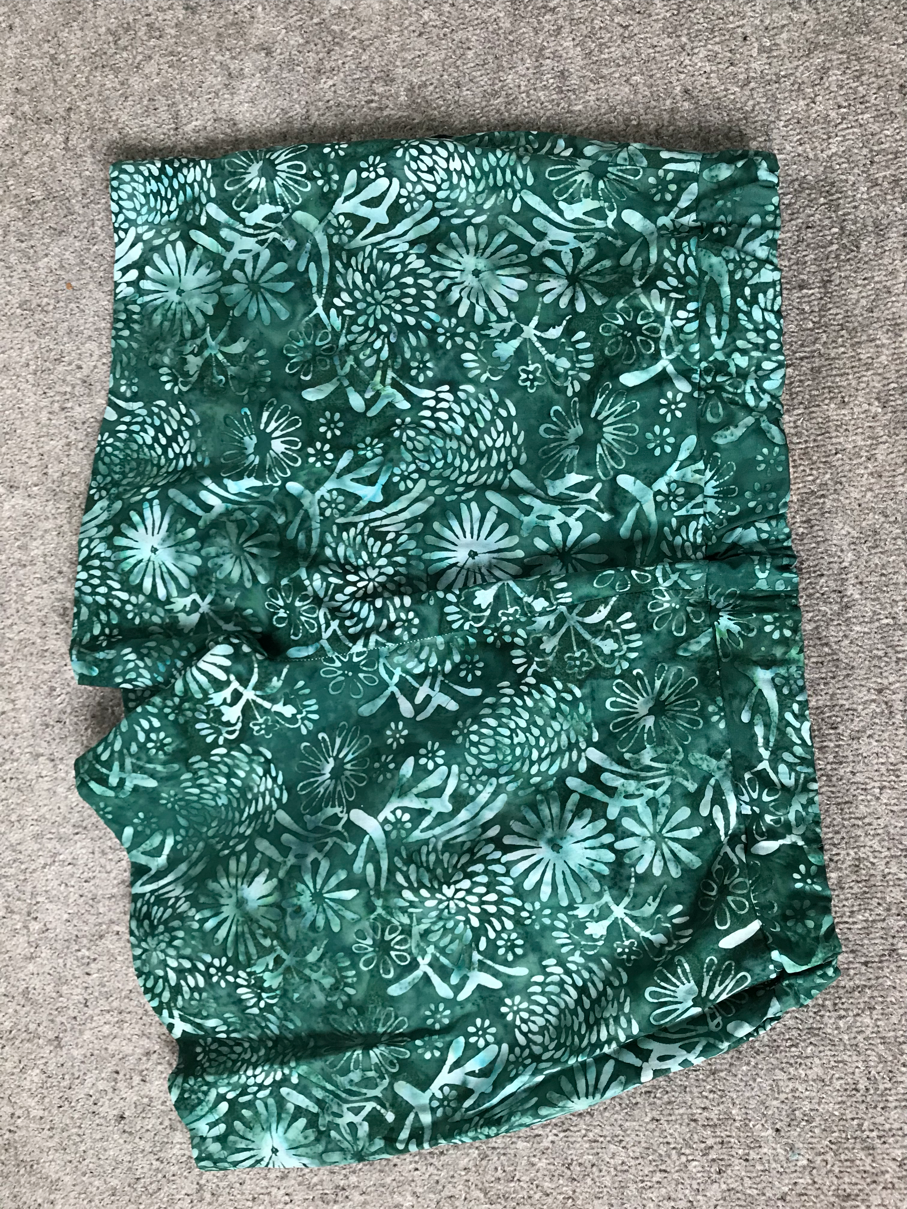 I guestimated the amount and was thankfully rather on the money.  It reduced the amount of fabric at the waist - I didn't bother about reducing the waistband as it wasn't a large amount. 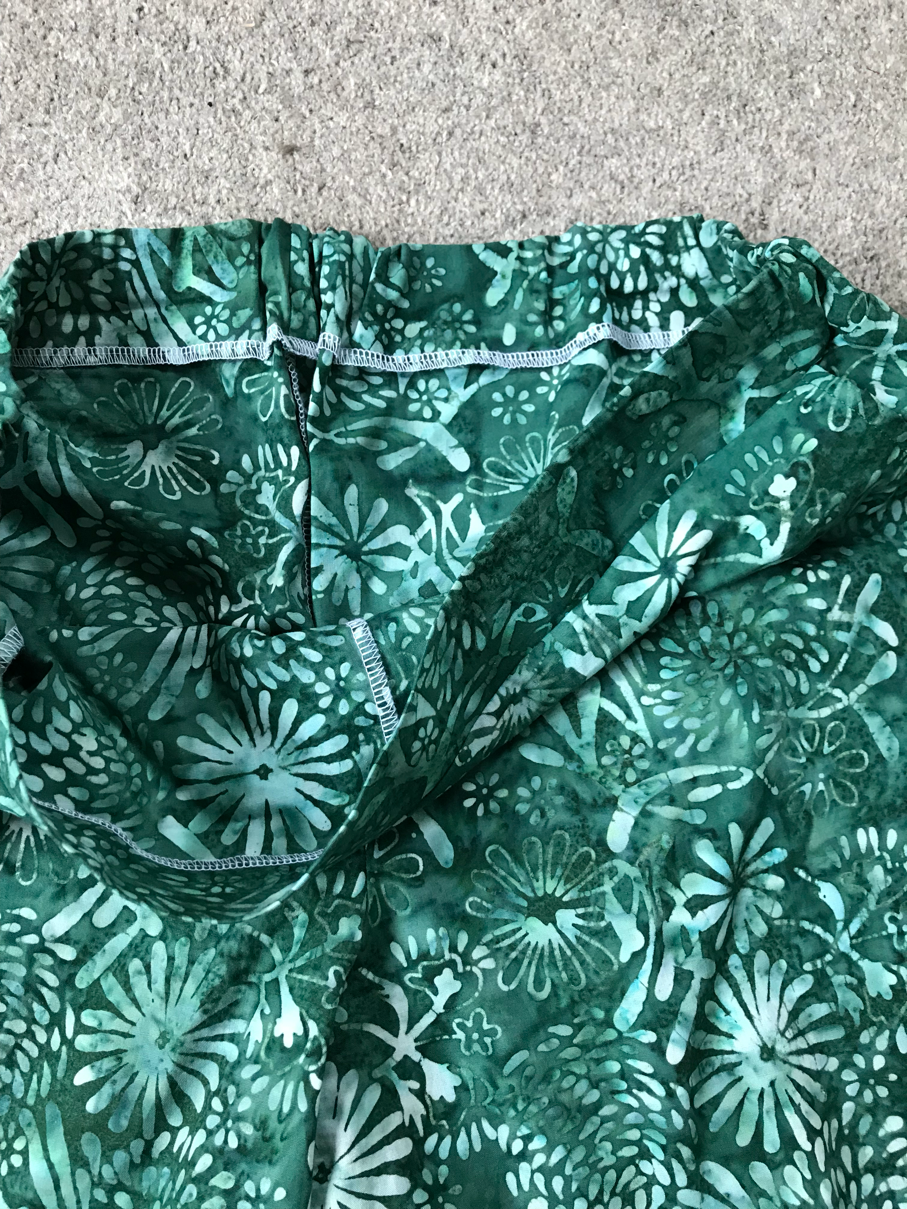 I self lined the pockets.

The fabric is a batic cotton I bought at Fabric Hoarders. 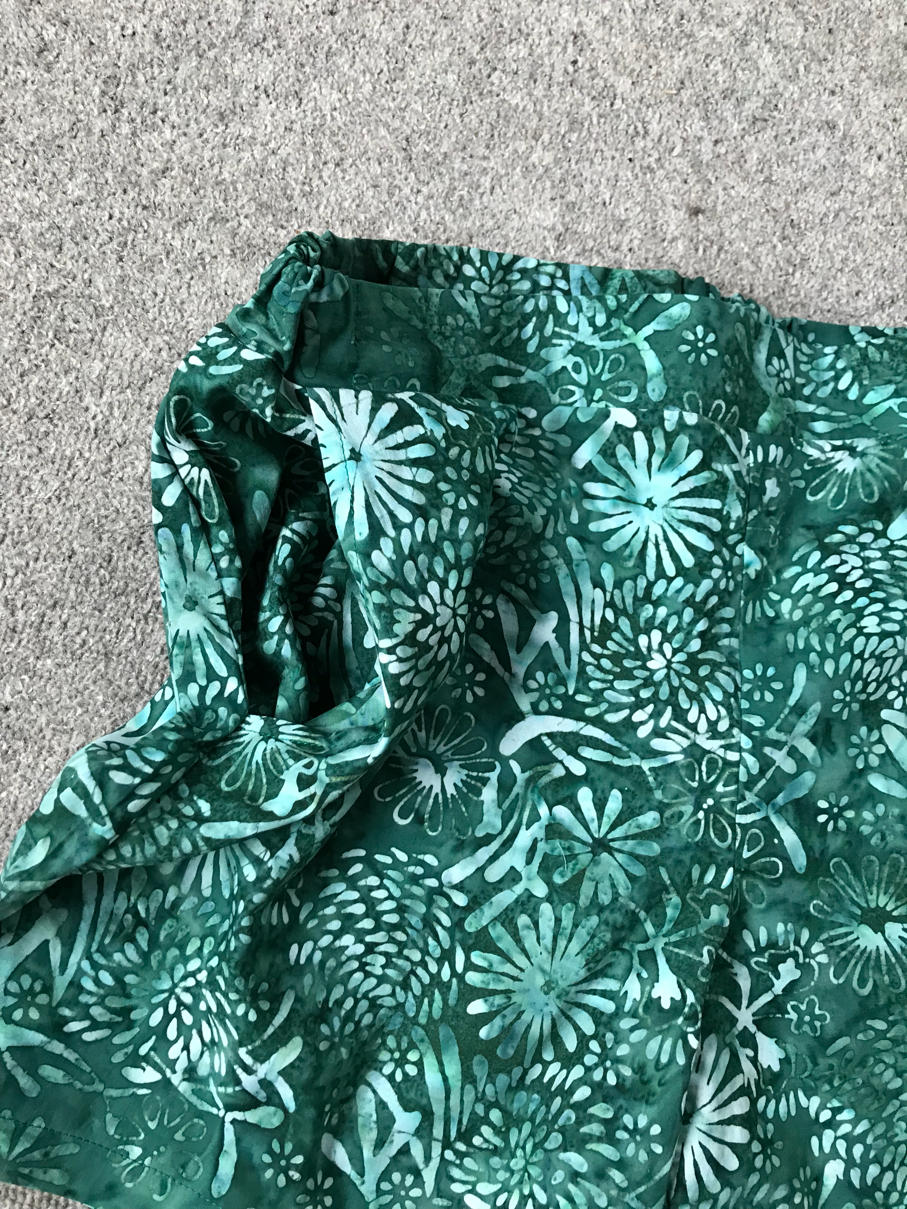 Version 5 is finished - I finally made the skort.  I've been sitting on blue linen from Fabric a brac (Desiree was the seller) for ages for this particular pattern so I'm glad its finally finished.  Just need to photograph and blog!