March 24, 2016
My last make before leaving NZ was the Cashmerette Appleton.  Inspired by both The Takahe Bites and Sew Biased, I wanted to try out the pattern.  I love that Cashmerette has designed for a curvy figure but was a little concerned that she has already factored in a Sway Back Adjustment. A sway back adjustment is great for other types of curvy figures but I don't need due to my almost non-existent derrière.

The dress came together quickly on my overlocker and apart from the waist ties, I didn't have any hiccups - plus there's a very helpful waist tie tutorial and a sewalong for this dress. 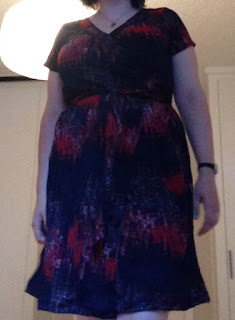 It fits well and is comfy - but the wrap has a tendency to blow open in wind (not such a problem in Melbourne but will be really troublesome in Wellington!).  I plan on making a slip for it when I get back to Wellington (and my much missed overlocker).  I plan on making another version in a heavier fabric in future. I think the future version will a nice addition to my wardrobe but have to be convinced that the slip will work for Wellington to avoid wardrobe malfunctions.

Fabric $3 a metre at Fabric Warehouse Popup Shop - I have a little left over but surprizingly I've made up something in each of the three fabrics from that buying trip!
Pattern Cashmerette Appleton
Amendments: graded between sizes for waist, hip and bust.  Used the D cup pattern pieces.
Future changes: make the overlap longer - so the dress is less likely to blow open in the wind.
Was it a win? Yes - a really wearable muslin - I've been mostly using it as a wrap over my swimming suit in the evenings (most classy!) 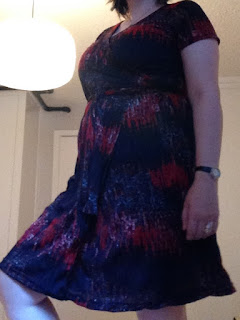 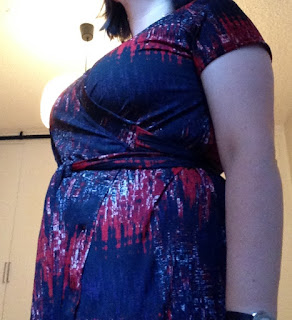