July 09, 2015
Despite my grand dreams, we drove to Las Vegas from LA in a normal rental car.

No soft top convertible for us :(  I can't remember why I chickened out at the time - I think it was the cost for the full week as though we wouldn't be doing a lot of driving once we arrived we did need to move accommodation and for me to drive back to LA. 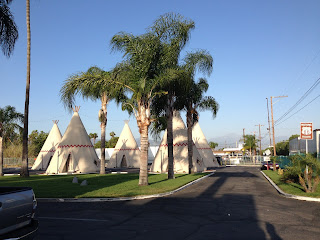 LA to Las Vegas is a rather quick drive but we stopped over on the way as I really wanted to check out the Wigwam Motel.  This way we could have dinner with a friend who lives close by, stop off at the outlet malls and take our sweet time leaving on both days. 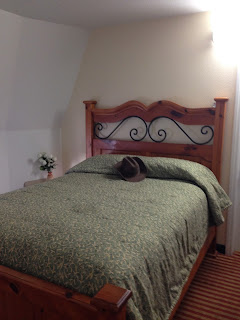 We were upgraded at the motel unexpectedly.  And while the motel was great value for money, its close to where the trucks stop off so there's a lot of sound in the mornings and its not in a scenic location by any stretch of the imagination!  When it was built it was in the countryside but now San Bernardino is pretty much part of LAs urban sprawl along the route.

The room was nice but basic and the little touches were definitely lacking (there was a random hole in the bathroom wall under the sink probably where they "improved" some piping).  But the owners were lovely and its off my bucket list! 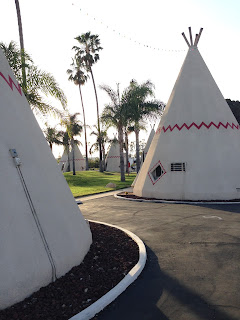 As I was reliably informed after posting on facebook, this is a teepee NOT a wigwam. Not sure the owners will rename... 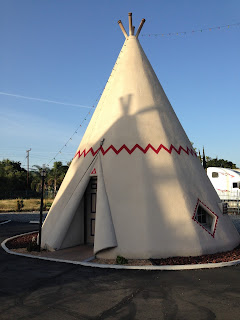 The road to Vegas got rather boring after a while.  But seeing random desert casinos once we were over the Nevada border (legal gambling) was rather odd. The large solar power collection was also interesting but I didn't manage to get anything near a good photo - my co-pilot was using my phone while I drove. 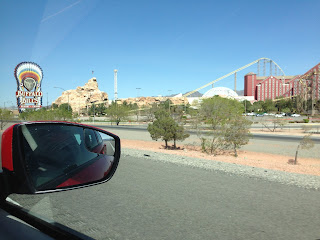 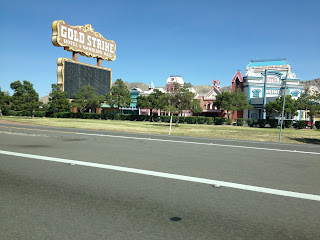 We visited with BM's friends and some family who live in Vegas - it was a great introduction to the city as CSI Las Vegas isn't quite the real depiction of every day living :) - especially as its actually shot in LA.  The city is incredibly artificial, even the suburbs.  One of the homes we visited was in a gated community designed and built by Hugh Hefner.  Despite my expectations of a very seedy undertone as a result, it was really upper middle class, rather sterile (the houses were different but only in a certain range), very manicured and very white.  There were two golf courses running throughout the suburb and a serious amount of faffing about to get in through security. 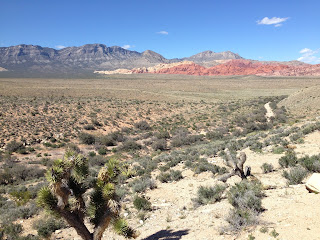 The landscape around Vegas however really didn't disappoint.  Beautiful.  Red Rock canyon (red rocks in the photo might have inspired the name, ahem).  I have such great memories of the Joshua Trees (foreground above) from the Joshua Tree National Park on my last visit. 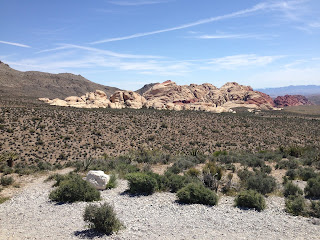 Its a really different landscape.  The amount of distance between the different plants was strange to see - its the competition between roots for moisture so there's a really diffusion of vegetation.  The plane trails in the sky were also interesting - a huge number and so easy to spot because of the lack of clouds otherwise. 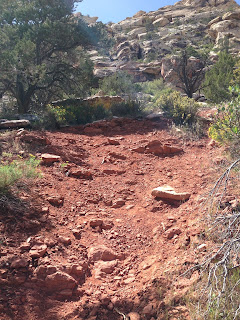 The soil around red rock canyon definitely lives up to the name.  Because we were visiting BM's friends, we got the guided tour and the pick of the best walks. 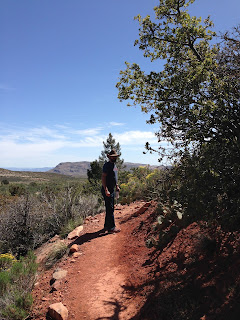 Strangely the other interesting thing on the first half of our stay in Vegas was the pet store.  We stopped in to see if we could get a litter mat (to stop the cats tracking litter out of the litter box) and found a selection of dog biscuits - yes, some of them look like doggie friendly choc chip and jam biscuits.  BM's friends had cute dogs so they had to be purchased :) 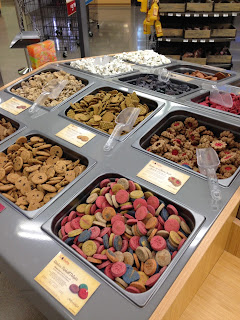 The second half of our stay was on the strip.  We stayed at the MGM Grand squarely in the discount part of the hotel.  Within five minutes of getting to our room, we found out the sink was dodgy.  We phoned to get it fixed and the next day it broke again.  Around the same time the screen blocking the view of the DVD player fell off when I opened the drawer in underneath.  We phoned again for a fix but they didn't fix it until we phoned again that evening.  At that stage, we asked for an upgrade.  Which we got but it was the floor above the casino floor and they were doing construction work during the early hours of the morning when the casino wasn't as busy but we could still hear it.  Would definitely not recommend based on the crap rooms and customer service.  The first room - looks a lot nicer in the photo! 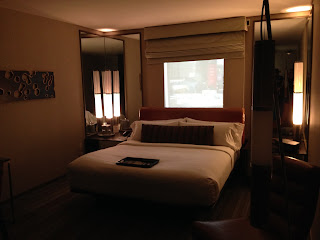 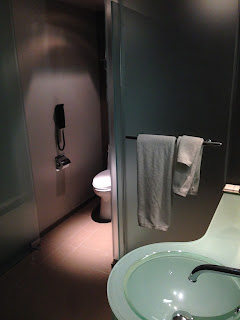 Vegas was a bit more fake than I expected (and I didn't have high hopes).  I found the strip really depressing with a number of older women in unclean tshirts flicking cards for call girls at the passing crowds.  BM had a reunion with some Canadian friends and split my time hanging out with them and walking around to get a feel for the place.  Didn't enjoy the indoor smoking and serious lack of sunlight. 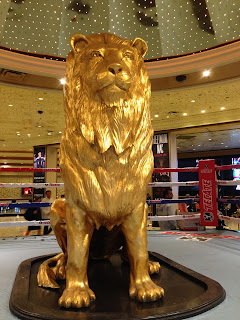 Some of the buildings were worth seeing and I spent a few hours walking up and down the strip seeing the different casinos and hotels.  I wasn't expecting the number of casinos off the strip - and the hooters hotel. 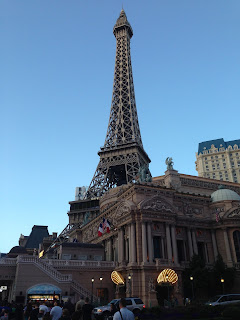 Some of the attractions were just so crazy for a city in the middle of the desert with serious water issues.  I think I preferred the real Venice - but then being able to quickly walk to Paris does have an upside! 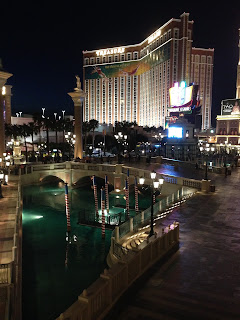 It was nuts how some of the buildings had the ceilings painted like the sky - and how strangely believable it felt until you looked up.  It looks just so fake in the photos.  As you would expect the buildings were simulated too.  All skin deep with shopping on the ground floor. 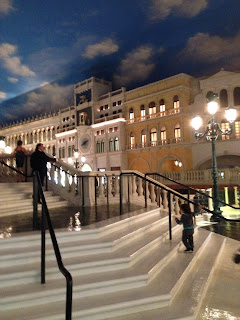 Here's the promised shot of the O2 bar in action. 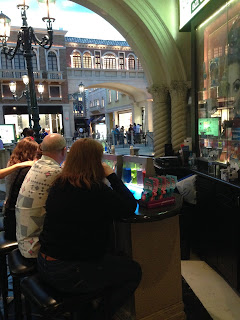 The Wynn hotel was fancy and came with a fancy water feature.  You might want to skip to the next bit - this is verging on TMI!  When I got back to LA I started to suffer from the heat but not through a lack of water instead I had excessive salt lost through sweat.  Given the amount of water I was consuming and not feeling sweaty, I can only imagine how much water gets lost here. 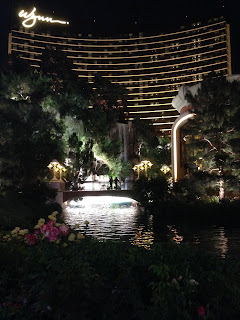 The Bellagio has almost 4,000 rooms and a massive outdoor pond.  Every night it hosts a waterfall set to music.  Rather pleased I got to see it and definitely the best free show on the strip. 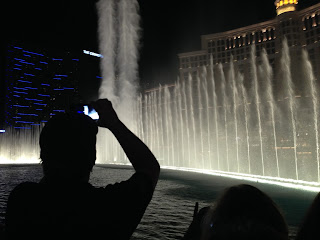 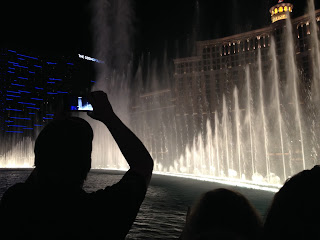 There wasn't really that much to do in Vegas - I lost $10 on the slot machines just to remind myself, I don't find it fun.  I did win my money back at one point but couldn't seem to find a cashier to convert the docket back and just kept playing until it was gone instead.  I still haven't got a monkeys what a lot of the different options actually meant.  Must be a slow learner.  As you'd expect, there were also restaurants and shops.  Not a lot caught my eye (probably having already bought my shopping list items in LA the week before...).  This dress was fun - I'm keen to make something like it in future! 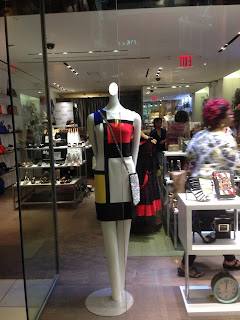 The apple store had a release of something but their terms of entry were SCARY.  Talk about big brother. 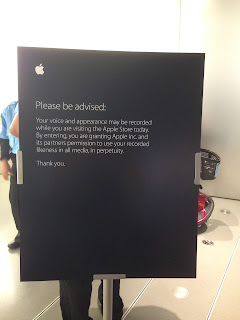 Unfortunately I didn't find a lot of sewing or craft shops off the strip.  But there was this display of vintage sewing machines that would set Sew Biased's heart a fluttering.  Of course, I only managed a crap photo. 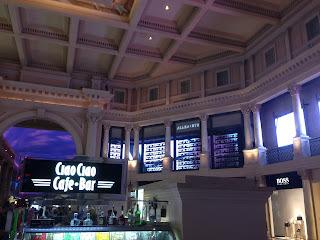 I tried to get to all the free shows on the strip out of interest.  The Circus Circus show was equivalent to circus shows when I was a kid.  Entertaining but definitely not spectacular.  The show I saw was a 'quick change' show where the two performers hid behind screens on in bags and quickly changed their clothes (or rather pulled off the top layer!).  I think I might have been the only non-kidded up adult in the audience. 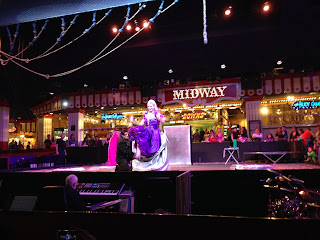 One of the advantages of the strip was the achievement of my New Zealand lifetime badge on fitbit.  A rather nice reminder of Middle Earth and a stark contrast to Sin City. The only real recommendation I'd make is to not bother going unless you like to gamble or its the only way to see a show you really want to catch.  But if you're there, the Freemount Experience - otherwise known as the old Las Vegas Strip - was fun and the least fake part of the city.  We also stumbled on to the Downtown Container Park at night.  A real highlight of the trip (after red rocks).  There was a country band on stage, different bars to drink at, spontaneous line dancing and an adult suitable playground.  The playground boasted a three storey tree house with slides, large foam building blocks and an interactive NEOS play system.  I was so surprized at how friendly it was.  The Neos was particularly good fun.  You set the system to different challenges where you can work with a partner or against to touch lights as they come on.  Quite a workout and Wellington definitely needs one!