And on to the next one 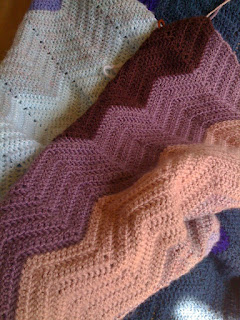 I just finished the brown stripe and unfortunately the lovely burgandy red I bought in Spotlight doesn't really suit.  So I've skipped to the next colour in line and when I've finished a row or so, will reveal that instead.  Its such a pity as I really like the red and am not too fond of the rusty brown I'm working with now.  I figure its about half way done and I'll be lucky to use it as a summer picnic blanket after all. :(  Though the bright side is that it won't be grass stained and I'll be able to snuggle under it for a winter.

The unfortunate thing about it all, is that I started this to start using up my stash of yarn and have managed to 'waste' three balls that won't make the cut.  So I'm almost up to the five balls I started the blanket to get rid of in the first place.  And that doesn't include the leftovers bits.  I also need to stop thinking about the next blanket I want to make.  Something with bright colours and a white base to use as a bedspread.  Summery and bright to liven up a room and make me smile - not a tall order at all!  Though if I'm using it on a bed, it'll have to be a more natural breathable yarn than my current acrylic stuff.  Something cottony or wooly, I think.  I suppose I could start a Wooleater blanket ala Sarah London. Yum!
crochet