December 26, 2009
Because the posting deadlines for Christmas presents are so early and because I hate shopping at the last minute for friends and family - prefering to take my time and find things I think they would really like - I'm writing this post in October instead of late December after my present owners have opened the parcels I have sent their way.  I'm even setting up the posting to happen after Christmas is well and truly underway in the Northern Hemisphere, knowing that unfortunately I'll be somewhere without broadband. 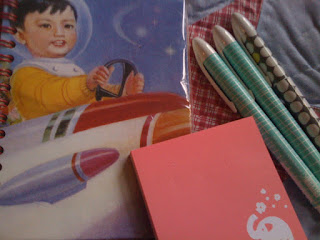 When I went looking at baking trays in October, I wandered into a stationery shop (I have a 'thing' about stationery!).  I have plans to buy my aunt and my mother a book for Christmas (in case I don't get the books I have in mind - I'll just let them assume that the ones I got were all planned).  One of the things I loved to do with books for my mother, when I lived in Ireland, was to read them first so that we could discuss them when she was reading them!  So I started to add postits of comments at different points in a book I sent her last year.  It was fun (and well received) so I'm doing the same thing again this year.  Although with much cuter postits :)  (that's the pink elephant, in case you missed it!)

I also bought the pens (which I'm holding onto for future pressies) and the crazy kid flying a spaceship notebook is probably going to be a keeper - unless I can think of someone that would like it more!