October 31, 2007
I have a pair of tights I love but unfortunately on my way to work I got a hole in them. (Damn zips on knee high boots, grrr.) So I took them home and washed them. I hate throwing things out (is there a pattern emerging?). I had two canvases on frames and decided to give art creation a go!

So step one. Find tights/pantyhose you like with a nice pattern (preferably preused so you don't go adding to the landfill/general waste). Get a small ish canvas on a frame (it can be bigger than the one in the picture as tights stretch) and assemble a scissors! 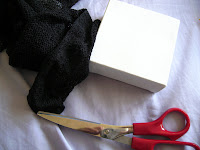 Next place the canvas into the tights and find a spot that you haven't ripped! Move it around until it looks good. 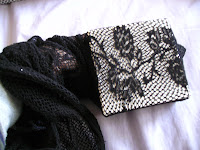 Cut the toe off and the leg leaving about 1 inch/ 5 cm on either side of the canvas. 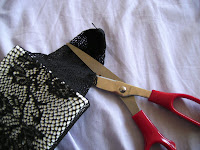 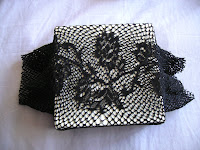 Affix each end of your tights to the wrong side of the canvas using a tack. I've used a large thumb tack here so you can see it properly but you can use small thumb tacks or small nails/tacks.


Turn over and admire your handiwork! 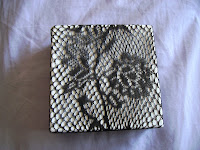 And here's it in the larger size! Nice. Waiting on a room tidying before I put them up on the walls. 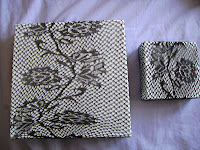